What person is crazy enough to set their alarm for 04:30 on a public holiday, I mean seriously one should be catching up on sleep? Sportsmen & women that’s who, no rest for the wicked as they say. The past week of training for me has been non-existent and I’m pretty sure I strained my hip flexor on my first 10km run in Krugersdorp just over a week ago. I rested my muscles for a few days after race then did another run last Sunday, needless to say I aggravated the muscle again during the run and have been resting it up until the Cradle run on Friday morning. I have noticed it starts acting up from just after the 5km mark, this may have been a case of going too far too soon with regards to the distance I am running. I also now know which muscles to focus on more in the gym in my strength training. My next road race is only in 2 weeks time so I have some time to rest and hopefully recover properly.

Ok so for the race (Cradle Half Marathon & 10km) roundup:

The start was cold (about 9 Degree’s) and the sun was still hidden behind the mountains and everyone was still hiding in their cars to keep warm. The race was scheduled to start at 07:00 but due to all the cars streaming in at this time the organizers decided to delay the start 20 – 30 mins. Once the race started everyone set off, jogging at this point was almost impossible as there was just so many people taking off at the same time, it was more like a walk / jog / walk / jog until everyone had the opportunity to disperse. Not sure why they decided to start the 21 & 10km runners together though? Given the fact that the start headed straight into quite a steep hill and that there was so many people trying to run (or in this case walk) up this hill I added almost a full 2 mins onto my pace. After we got out the main gate (about 2km later) and onto the main the road, the group was able to open up fully and everyone was able to find their pace that they normally run at. 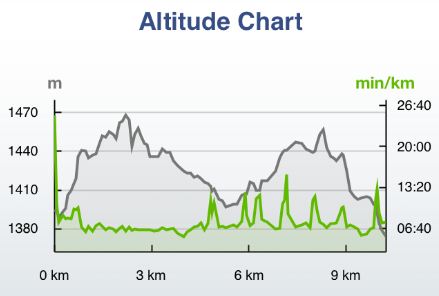 The route the organizers had planned is one I know very well as it is where I do nearly all my cycling. The race proceeded to head downhill from the main gate right up to the 5km point where the 10km runners turned around and then were forced to run back up the hill which we had just run down (I swear races were they plan this is just evil!). Looking back at my pace for the first 5km I must say I was very happy with it and my running up to this point definitely seems to be improving. As I mentioned at the start after the 5km point is where all my trouble’s start, as running from this point turns out being more of a run / walk / run / walk depending on the pain. I have discovered that I am a rather strong hill climber(all 410m of it) and am able to keep quite a nice pace when they pain wasn’t too intense, hopefully once my hip has recovered fully I will find out just how long I will be able to hold that pace.

The hill going back up to the lodge is not one of my favourite hills, even when i’m cycling I sometimes dread going up it. The last stretch from the 9km was quite nice as it was all downhill right up to the finish line. Looking back it was not such a bad race even with all the walking I did I came across the finish line with a time of 01h17m12, my pace for the race wasn’t too bad either finishing with a pace of 7:30 min/km.

So it has been a few days since my last run and my legs still had not recovered fully before my race this morning. I’ll be the first to admit that I have pushed myself and my legs with regards to the running in the last few weeks, I think most people would take a while before jumping straight into a 10km. The last few days have been a little difficult getting around, haha, with my quads burning and my right hip being a little sore. I was almost recovered this morning, I think another day and I would have been good to go. In any case I committed to doing this race and I was going to finish it! 🙂 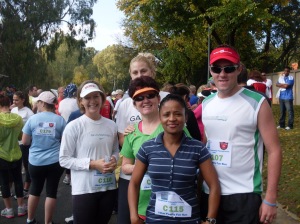 Running on 5 hours sleep I can’t say I was totally prepared for this race but I was looking forward to it though (not sure my legs would agree with that statement though). I was afraid the start of the race would head straight up a hill towards Olivedale Clinic and unfortunately I was right with the first 1.7km going straight up, I would say it was a steep climb but it was a long drag! Although being a hill I am very happy with the pace I held going up the hill and passing some other runners along the way. The gradient for the race was an interesting one heading up the hill and then sort of back down again.

The 10km route was 2 laps of the planned 5km route, for me the second half was the definitely the toughest. My right hip start acting up on me and I pretty much ended up walking up the hill, a lot more time is definitely needed on the road so I can get used to the impact. Once I got to the top I started running again however I slowed my pace down a little to adjust with the pain. The last kilometer down to the finish was definitely a blessing. Once I crossed the finish line I breathed a huge sigh of relief as I could finally stop to rest my hip. I ended up coming in at 01h18m03s 🙂  Nice short report, then again it was a very simple route.

For me there is no stopping, you just have to keep running!

Just to keep everyone in the loop I started running in the last few months of last year, I slowly built myself up to running 5km with some colleagues from the office as part of our work / life balance initiative. I stop running late November due to picking up the flu and since then I haven’t done any real running training, I’ve done one 5km race in Jan and another in Feb. I was really keen to do training but I decided to focus on my Cycling and I put in a lot of hours for the Argus Cycle Tour. I decided that when I got back from Cape Town I would put some more focus on my running and getting back to the point from where I had stopped in November.

Having done very little training this year for running I must say that in the last 3 weeks I have come a looong way. Having started again 3 weeks ago on the treadmill with a 5km run and not having stopped once to walk is huge for me, as all the runs I have done in the past have been a series of run / walk / run / walk / run (you get the picture). Up to my race last night, I think I have done three treadmill sessions of 5, 5.5 and 8.5km respectively and two road runs of 5.5km each.  For all my training sessions I have managed to keep a speed of about 8.5km/h although not quite a running pace, it is a pace I am very happy with. Of all the sports I do running is definitely the hardest and most definitely does not come naturally for me (see my post on CMT), if you had to see me run I think it would be pretty obvious. As I mentioned I believe my running has come a long way, I can honestly say I feel I am much stronger runner than I was before and I think I can attribute this to my cycling and all the spinning I do. As strong as I feel though I was not sure I had done enough running to jump straight into a 10km run…

Ok so for the race (Noordheuwel 10km Nite) roundup:

I must be honest I was nervous for my first 10km and at the same time I was also excited. It was a beautiful evening for a run and was not too cold either, the air was nice a cool and definitely made for great running conditions.  As the start whistle blew the 10km group headed out and we were promptly greeted with a downhill, I think for most people they would be celebrating as downhill’s are your friends however at this point I was thinking ‘Oh great! A downhill! That means there is an uphill to, what a way to start the race”. Needless to say at the bottom of the hill a U-turn was made through a shopping centre and we promptly headed back up the same hill we had just run down (Who does that! That is just evil!). I think this hill separated all the serious runners from the recreational ones, although I am not a serious runner I am happy to report I did not walk up it however I did not have a fast pace up it either. The first 4km went pretty smoothly and looking back at my pace for them it was under 7min/km, there we some climbing involved but nothing too serious.

From about the 5.5km was when the serious hills started I was hoping I wouldn’t have to stop and walk, as up to this point I did not have walk once, but unfortunately this was not the case. I did manage to climb half of the hill before I started walking, once I reached the top though I carried on with my running pace. This carried on until about the 7.5km mark, from here there were some slight hills again but no so bad that you could not run up them, it was a nice run from here up to the 9km mark. The first 200/300m of the last km was a steep climb, I did give it my best shot a running it but it was just too much. The last few hundred metres was a nice easy climb back up to the finish line.

So I did manage to finish the race and with 6mins to spare from my planned time of 1h20, coming across the finish line in 01h14m20s. My average speed was 8.15km/h just a tad slower than my normal speed of 8.5km/h and my average pace was 7:22min/km, so I was a bit slower than normal but I attribute that to all the hills. From my point of view it was not a bad time at all considering all the walking I did up the hills. 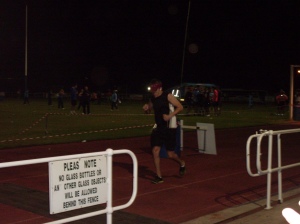